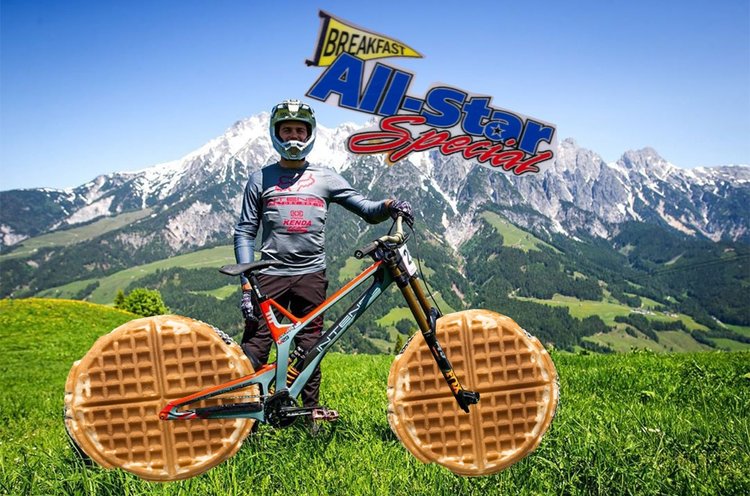 WE MET UP WITH NEKO MULALLY TO GET TO KNOW HIM A LITTLE BIT BETTER. HAS HE EVER KISSED ANYONE? DOES HE EAT WAFFLE HOUSE BEFORE RACES?? DOES HE HAVE A BROTHER THAT LOOKS SIMILAR WHICH IS REALLY CONFUSING?????

FIND THOSE ANSWERS AND MORE, BELOW.

Q: Saw you just got back from Andorra, How was the food?

Andorra is a resort country that feels like a cruise ship at a ski resort. If you are there for a good time, the buffet dinners and all inclusive bar is great, but if you're there to race it's a little greasy.

Q: You’ve been on an Intense Bike all year.. What exactly does that do for your intensity going into races?

I'd say it's pretty good! The team this year is really dialed, we have a good vibe and everything we need at the races, so it gives me that little extra motivation coming into the races.

Q: When you aren’t in other countries, you split your time between North Carolina and Tennessee.. What do you think makes Tennessee SOOOO much better than NC?

I'd say the lack of rules, being able to do just about anything you want makes Tennessee a great place, and a terrible place all at the same time!

Q: Windrock really is a second home for you, and the trails are pretty dang steep! Have you thought about adding escalators to the mountain?

Coming back from Europe, Windrock really isn't that steep! It's funny to me when people refer to "the steep section" at windrock and I'm thinking we don't really have any steep sections on our downhill tracks... We definitely have a sustained gradient that doesn't let up and some local only steep chutes, but in general I think Windrock is a perfect gradient for Downhill riding. And we're working on some mellower trails for the enduro/ trail crowd!

Q: You prototyped some Kenda Tires in Andorra. On a Rubber-Scale from Durex to Magnum XL’s, how were they??

I wouldn't really know what a magnum feels like, but all the sealant stayed inside the tire if that's any measure...

Q: I know you ride with Dakotah Norton a lot.. How much does his nose ring effect his riding?

I think sways his tinder matches to a certain demographic, which negatively affects his riding, most of the time.

Q: Is it true that you eat 2 All-Star Breakfasts from waffle house before each race and, is it expensive when you have them shipped to you overseas?

Yes, at the top we're looking for the smallest of margins and spare no expense.

Q: Does Aaron Gwin ever share his red bull with you?

Aaron is a great guy, and would share anything with his teammates.

Q: If you could have a secret handshake with anyone on the UCI Pro DH Circuit, who would it be and what would it look like?

I don't know, the french guys are always kissing each other, so maybe something like that?

Q: Oskar blues sponsored you at one point.. Where you contractually obligated to be drunk that entire year?

No, they were super chill. You will have lots of friends though when you bring coolers full of beer to the trail!

Q: Of the races that you’ve won, Which Meant the most to you and why?

I'd say National Champs last year, because the level of racing in the US was so high and I beat some fast dudes. I get to rep the US flag on my sleeve all season with pride this year. I've had some races that have meant a lot to me that I didn't win as well.

Q: Let’s really Dig into Neko here… A little known fact about you is that people refer to you as the Mallard. Why is that?

My last name kind of looks like that I guess, and when we play with the radios at the races my call name is Mallard Duck. John is Big Bear, Ben is Cab-Over Ben and Aaron is Golden Eagle. Fun stuff!

Q: Have you spent your whole life on two wheels or did you do anything else growing up?

Did I play sports? Hell no, I ride Mountain Bikes!

Q: In regards to Pineapples on pizza, where do you stand?

Q: Who is your celebrity Crush?

Q: Which was more nerve racking.. Your first DH race or your First Kiss?

Not sure, both probably happened around the same time though!

Q: If you don’t already have one, what design would you get for a lower back tattoo?

Insert Here seems fitting for a low back tattoo...

Top of the podium with a signature pair of hand up gloves.

Q: If you and your brother Logan arm wrestled, who would win and what excuse would the loser use to explain their loss?

I would win, and he would say it's because my arms are so long since I haven't evolved from my primitive cousins.

Q: How many L’s are in your last name?

3, and Logan's name saved in my phone has them in the wrong order haha

Well Neko, it was wonderful getting to know you. We hope to follow up in a year or two to check in on that 3.5 year goal!

WOW! IT WAS REALLY FUN GETTING TO KNOW NEKO MULALLLLLLY. WITH SO MANY INTERVIEWS OUT THERE ABOUT TIRE PRESSURE, WHAT TIRES PEOPLE RUN, HOW BIG PEOPLES TIRES ARE ETC., IT’S JUST NICE TO LEARN A LITTLE BIT MORE ABOUT NEKO, THE PERSON. STAY TUNED FOR MORE IN DEPTH INTERVIEWS WITH MEDIUM TO TOP TIER ATHLETES AND MAYBE SOME PEOPLE THAT ARE SLOW AS HELL.

IF YOU FOUND THIS INTERVIEW RIVETING, PLEASE SHARE BY COPYING AND PASTING THE LINK BELOW ALL OVER THE INTERNET. ALSO, FOLLOW NEKO ON SOCIAL MEDIA. HE’S A REALLY FUN GUY.